“Jack Frost is very small, I think he’s here today. He nips at our nose and nips at our toes, when we go out to play”

“The cold wind doth blow and we shall have snow and what will the robin do then, poor thing? He’ll sit in a barn and keep himself warm and hide his head under his wing, poor thing.”

In Year One we listened to Saint-Saëns’ Carnival of the Animals. We danced and moved in ways that reflected the music, identified which piece is for which animal and composed our own ostinato patterns for each animal. We notated individual compositions for a lion hunt and performed them using percussion instruments. We’ve also enjoyed singing “a cat sat on a mat” and “I have a dog and his name is Rover”.

In Year 3 we watched Fantasia’s animation of “The Sorcerer’s Apprentice” by Dukas and thought about how the music created different moods. We tried to describe it using musical vocabulary such as ‘pitch’, ‘dynamics’, ‘texture’, ‘timbre’ and ‘tempo’. We explored composing and performing music using graphic notation and tried to graphically notate The Sorcerer’s Apprentice and then recreate it using ukuleles and percussion instruments. We then moved on to listen to ‘No Place Like Home’, one of the BBC’s 10 pieces series. We thought about the sound of Otley and worked in small groups to create our own compositions. The pupils individually evaluated these and decided the overall winners were Patrick and Stanley.

In Year 5 we have explored music linked to World War 2. We enjoyed listening to Glenn Miller and creating our own jazz improvisations on glockenspiels. We also sang the Glenn Miller inspired song “Hey Mr Miller” as a three part round. We used our ukuleles to play chords whilst singing “Daisy Daisy”, “Run Rabbit” and “You are my Sunshine”. We looked at how Morse Code could be used to create rhythmic compositions. Finally, we thought about sounds that might have been heard during WW2 and used these to inspire individual/ small group compositions. These were evaluated to see how much interest had been provided by changes in pitch, dynamics, texture, timbre and articulation. The overall winner was James.

At Ashfield we offer small group instrumental lessons for guitar, ukulele, piano, flute, clarinet and violin. These are charged at £40 per term for all instruments except piano, which is charged at £50 per term due to being taught in smaller groups of 2. All pupils are invited to perform in a school music concert or performance opportunity each term.

All pupils also have the chance to play ukulele, glockenspiel and recorder in our whole class music lessons, taught by a music specialist.

Our school has an active choir, which rehearses Tuesdays after school (this year starting in October 2019). We have sang at the Otley Victorian Fayre, Otley Christmas light switching on, Otley Christmas Tree Festival and our Family of Schools Yeadon Town Hall music concert. For the past two years we have created a music video for a Leeds choir competition.

Our school orchestra rehearses Friday lunchtimes 12:45 to 1.10. This is open to any pupils receiving lessons (within or outside of school) who are capable of reading standard notation and playing their instrument independently. Piano pupils are welcome to join us on glockenspiel.

We have a break time practice club on Tuesdays open to any children receiving lessons. This gives them an extra opportunity to prepare for their next music lesson or to share their pieces with friends as they practise.

In Year 2 we listened to excerpts from ‘The Nutcracker’, scored by Tchaikovsky. We watched videos of the ballet and listened to a special story book being read, which played relevant clips of music for each page. We thought about the different instruments we could hear and investigated the brass, woodwind and string families. We also revised how to notate quaver, crotchet and minim rhythms using our ‘running, walk and skate’ story. We the moved on to practising our songs ready for Christingle, thinking about how to warm up our voices and improving accuracy of pitching and appropriate timbre/dynamics for each song.

In Year 4 we continued learning how to play the recorder, using the notes G (for grip), A (for another finger) B (for both), C (for centre) and D (for drop) with some pupils perfecting the start of ‘Jingle Bells’. We also worked at a fantastic arrangement of ‘The Wassailing Song’ for our KS2 Carol concert. We worked at how to keep a steady pulse, with no rushing, listening to the backing track as we sang and performed. We all tried playing a recorder drone in time with the backing track and pupils who have instrument lessons joined in on cello, violin and guitar. Piano pupils joined in using chime bars.

Year 6 created an arrangement of ‘Oh Little Town of Bethlehem’ for the KS2 Carol concert. All children were offered the chance to sing a solo line and we were thrilled to find 6 pupils take on this opportunity, with a further 4 pupils forming a quartet. The class then continued singing in unison whilst playing ukulele (using chords C, F and G). It is wonderful to experience their performance skills growing to a point where a fluent performance was accomplished in just 3 practices.  We then evaluated 6 different arrangements of ‘Carol of the Bells’ discussing differences in timbre, texture, dynamics, articulation, tempo, pitch, rhythm, style and structure. We decoded standard notation (writing letter names under each note) so we could play 'Carol of the Bells' on glockenspiel, with some children challenging themselves further by learning harmony parts.

Pitch decoded and written under each note.
Notes taken to aid musical discussion

Thank you to all children who participated in our following music performances:

Instrumental concerts for Year 3/4 (Monday), Years 5/6 (Tuesday) and Guitarists/ukuleleists (Thursday). It was amazing to see how many of our pupils play an instrument and brilliant to hear the progress they have all made since our last concert.

Choir sang on a stage at this year's Otley Victorian Fayre. We sang:

'When Santa got stuck up the chimney'.

Year 1 have been listening to 'Peter and the Wolf'. They learned about different instruments, with live performances of the flute (bird), clarinet (clarinet) and violin (Peter). We responded as a class with our own percussion compositions for each character.

We've also joined in the class 'space' theme. We warmed up our voices, sang our Kodaly 'do, re, mi' scale and sang 'zoom zoom zoom, we're going to the moon'. We used chime bars and tuned bells to play the first three notes of the song. We worked at keeping a steady beat and introduced our special 4/4 Dalcroze time signature dance.  The children used graphic notation to write space compositions using long and short sounds.

For Harvest festival the class sang "shake, shake the apple tree" with groups of percussion being added for each repeat of the song. They showed amazing self control to ensure they only played their instrument when required in the song.

Year 3 have been learning how to record pitch using standard notation. We found out different ways of remembering the notes with lines through their heads: 'Every Good Bogey Deserves Flicking' was popular! Working with glockenspiels they composed melodies to go with rhythms derived from Egyptian topic words and then notated these onto a stave. Using the glockenspiels we also played a C major scale (happy sounding) and an A minor scale (sad sounding). We took it in turn to improvise in these keys.

For Harvest festival the class sang "Across the Fields" as a round. Within class we also performed this with our class set of ukuleles. They did well to keep a steady beat and confidently sing whilst hearing the harmony from the second group.

Year 5 have been learning about Samba music. We started learning different syncopated rhythms using vocal sounds, then built up texture by splitting the class into 2, then 4 parts. We did lots of games centred around keeping a steady beat, as it is tempting to speed up the tempo! We then graduated onto our school samba instruments (surdo drums, agogo bells, tambourims and shaky eggs in place of traditional ganzas). We arranged a structured composition with introduction, section A, section B and ending. As conductor I used a samba whistle to communicate when the class needed to change to the next section.

For Harvest festival the class sang "Harvest Samba" confidently splitting into 2 groups for the harmony section.

As the class were learning about the ancient Greeks we also learned the song "Living it up in Greece".

Examples of Year 3 compositions - using rhythms from Egyptian topic words and experimenting with pitch on a glockenspiel.

Silver Birch and Willow classes were very lucky to watch a performance of "Skylar's missing note". This touring music and theatre project was supported by Leeds International Piano Competition. It certainly met it's objective of introducing young children to the magic of piano. In a workshop afterwards they learned about rhythm, pulse, pitch, dynamics and more as together they composed an ending the pigeon's part of the story. We'll be following up on the project in our curriculum music lessons this term. 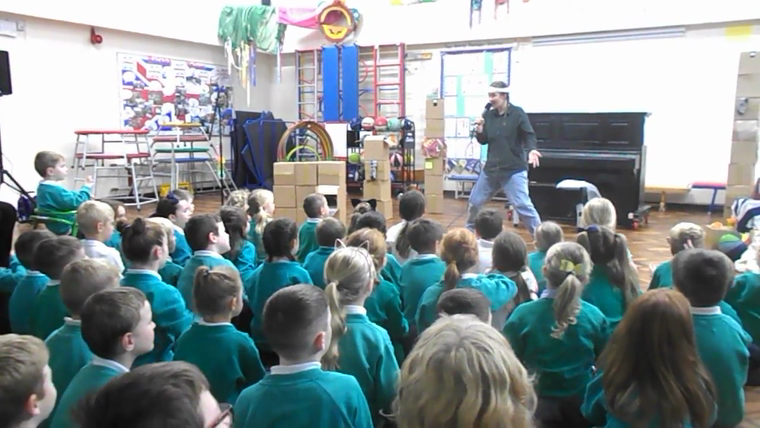 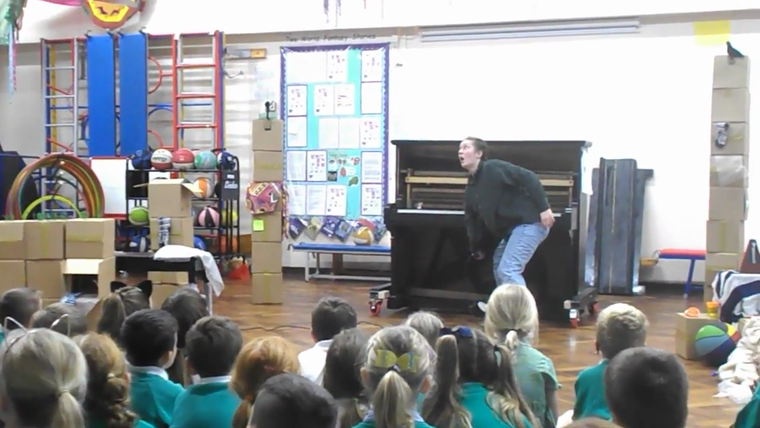 Heather Pollock, a local musician and retired doctor, visited our school this week to talk about the science of music and perform on some of her many instruments. She used pupils to represent the different parts of the ear, with coloured balls passed between them to show how sounds pass from outer ear through to our brains. She then demonstrated her many different instruments, including an African drum, panpipes, whistle, flute, violin, harp and lyre. The children particularly enjoyed it when Heather played the theme from 'Frozen' on her harp. Thank you Heather for giving up your time to play for us.

Well done to ukulele and guitarists who performed "Castle on the Hill" during the Year 6 leaving assembly. Great to hear so many pupils performing and singing together, welcoming such a great performance opportunity.

We were so grateful to members of Otley Chamber Orchestra who volunteered their time to perform at Ashfield today. They brought a string section comprising two violins, a viola and cello and a woodwind section comprising two flutes, an oboe, a clarinet and a bassoon. They also used a pianist who helped to conduct. It was great to hear their instruments individually and as an ensemble playing classical pieces by Beethoven and Handel alongside Disney favourites such as 'the Bear Necessities' and 'supercalifragilisticexpialidocious'! 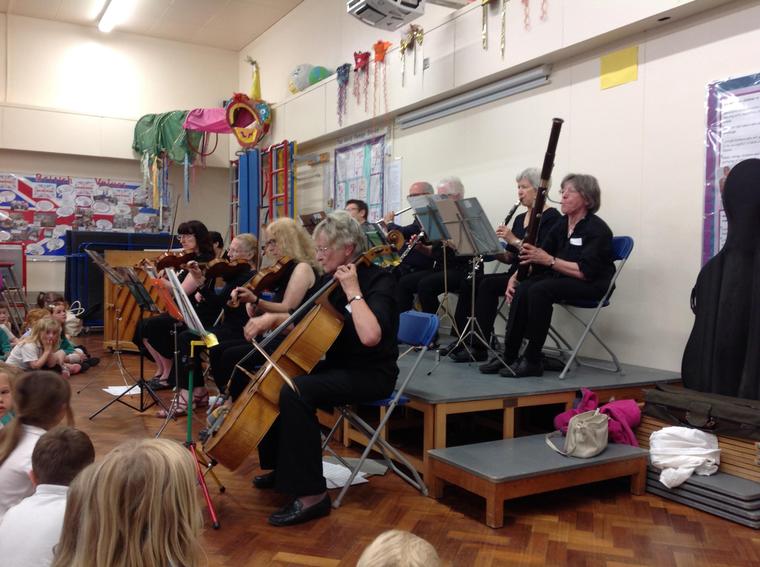 If you know of any choirs or musical ensembles who would like to perform for our children, please do let us know.

Well done to instrumental pupils who performed at our "Festival Stage" during the Summer BBQ. It was exciting to hear their performances amplified through a PA system. 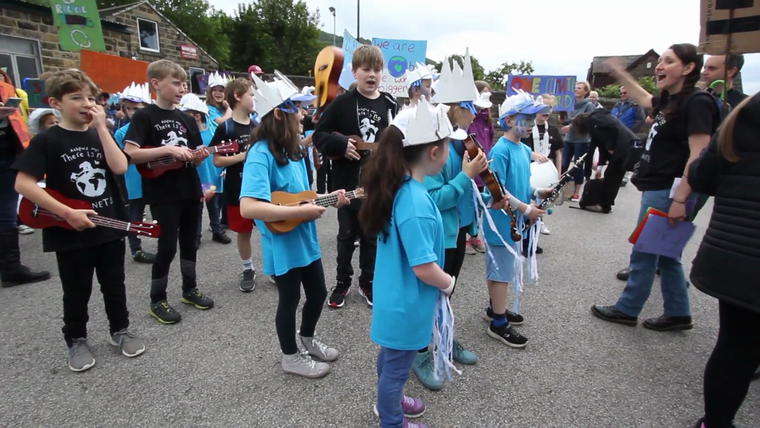 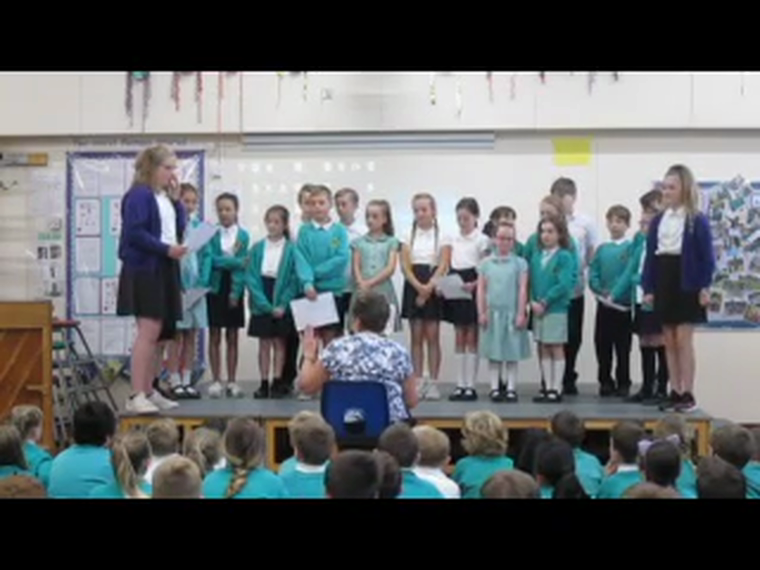 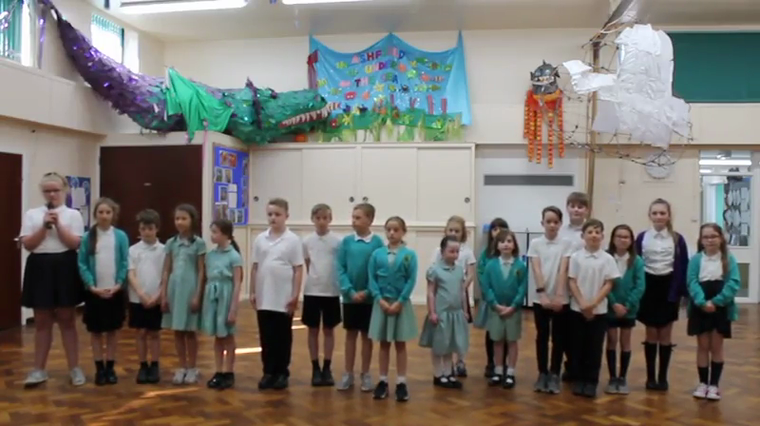 Our first take of "A Million Dreams". We'll record it again in assembly after half term. 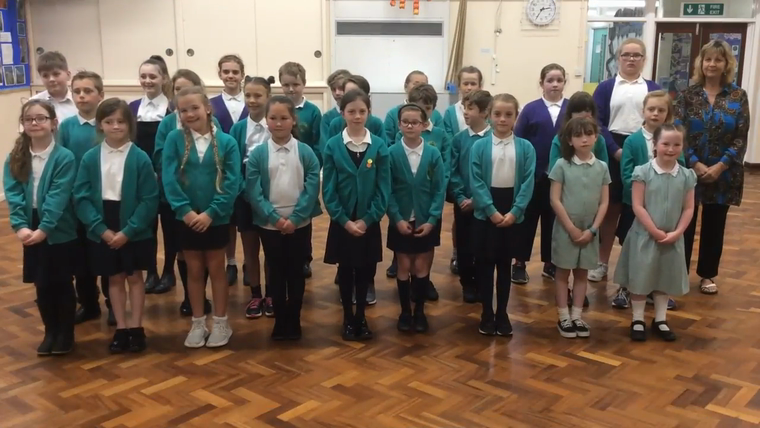 We're proud of how many children love to both sing and play instruments at Ashfield.

The whole family sang a final song together
Ashfield Orchestra
Ashfield Choir
Ashfield took part in a family of schools' concert in March 2017.  We were very proud of their performances.  It was great to have so many instrumentalists playing.
Top
Cookie information
Cookie Notice